ADOPTION: Is it OK to treat unwed fathers an unwed mothers differently? 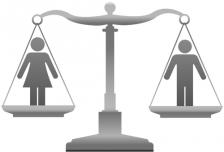 Absent a statutory ground enumerated in Indiana Code § 31-19-9-8 to dispense with a mother’s consent to the adoption of her child, an adoption cannot take place without the mother’s consent to the adoption. The same is not true of an unwed father. Under Indiana statutes, an unwed father, who is not a “legal” father* is only entitled to notice of an adoption, assuming compliance with other Indiana statutes, but his consent to adoption is NOT required. Under the Indiana adoption statutes, the consent to adoption is only required of those men who have established paternity of child in court proceeding other than the adoption proceeding or by executing a paternity affidavit. See Indiana Code § 31-19-9-1(a)(2).

The Indiana Supreme Court, in M.L.V. v. Wilkens, 598 N.E.2d 1054 (Ind. 1992), held that the difference in treatment between mothers and putative fathers did not violate the Equal Protection Clause of the United States Constitution.
Specifically, the court in M.L.V., held:

Because it is more difficult to identify a biological father than a biological mother, out statute requires that biological fathers take some action to demonstrate their paternity. . . . Given the biological differences between mothers and fathers, the legal differences between unwed mothers and unwed fathers, and the purposes of the adoption statute, we conclude that equal protection will tolerate Indiana’s differential treatment of unwed parents in the adoption setting. The case law of the U.S. Supreme Court suggests some distinction between unwed fathers who are active parents and those who are not. A statutory scheme based upon this distinction could require the consent from unwed fathers who have participated in the upbringing of the child and not require it from those who have not. This, however, would cause litigation of the wrong question in an adoption proceeding. Before a court could decide who was required to consent to the adoption and before th court would reach the basic question of whether or not the child could be adopted, the court have to determine ‘how good an unwed father’ someone has been. Our legislature has not chosen such a scheme, and we conclude it is not constitutionally mandated. (citations omitted)

*Indiana law recognizes two types of fathers. A “legal” father is a man who is married to the mother of the child or who has established paternity of the child in a court proceeding or by executing a paternity affidavit. A “putative” father is every other man who is, or claims to be, the father of a child. See, Indiana Code § 31-9-2-100, the definition of “putative” father.