When a Consent to Adoption is not Required under Indiana Law 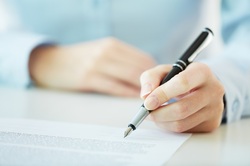 Indiana law requires that in order for a petition for adoption to be granted for a child who less than eighteen (18) years old consent to the adoption must be given. Whose consent is required is a topic for another blog post. For now, we are going to focus on when a consent to adoption is not required.

Remember that you only need one of these, not all of them. The most commonly used reasons why a consent to adoption is not required by a parent are:

Indiana Code § 31-19-9-8(a)(1) states: “A parent or parents if the child is adjudged to have been abandoned or deserted for at least six (6) months immediately preceding the date of the filing of the petition for adoption.” This is pretty self-explanatory. If a parent, or parents drop their child off with a friend, relative, or complete stranger, and it can be proved before a judge that the parent or parents have abandoned the child for a period of six (6) months, then those parents’ consents to the adoption would not be required.

Failure to Support or Communicate

Indiana Code § 31-19-9-8(a)(2) states: “A parent of a child in the custody of another person if nor a period of at least one (1) year the parent fails without justifiable cause to communicate significantly with the child when able to do so; or knowingly fails to provide for the care and support of the child when able to do so as required by law or judicial decree.” Notice here that there is not the same requirement in the abandonment situation for the failure to take place in the preceding period of time to the filing of the petition for adoption. This failure can have had happened at any point in time. Obviously, the closer that this failure occurs to the filing of the petition for adoption the more likely a judge is going to rule in your favor. If the child is 10 years old and the father didn’t support for the first twelve (12) months of the child’s life, but had regularly supported the child for the past nine (9) years, it would be pretty difficult to convince the judge that the father’s consent to the adoption would not be required.

Subsection b of Indiana Code § 31-19-9-8 states: “If a parent has made only token efforts to support or to communicate with the child the court may declare the child abandoned by the parent. This was added by the legislature to prevent deadbeat parents from making token efforts which would have otherwise thwarted a prospective adoptive parent from successfully adopting a child to give the child the permanency and love that all children need.

Indiana Code § 31-19-9-8(a)(11) states: “A parent if a petitioner for adoption provides by clear and convincing evidence that the parent is unfit to be a parent; and the best interests of the child sought to be adopted would be served if the court dispensed with the parent’s consent.

There is no legal definition for “unfitness”; therefore, are no elements that are required to meet the definition of unfitness. Unfitness can be proved based collectively on a parent’s mental state, social behavior, inability to hold down a job, inconsistent dwelling; drug and/or alcohol abuse, criminal history, gang affiliations, history of violence, failure to support other children and many other types of behavior.

Judges take dispensing with a parent’s consent adoption very seriously. It is important that if you are going to alledge that a parent’s consent to an adoption is not required that you are able to prove, by clear and convincing evidence, why that is the case.